Phoenix Beverages is still at it! 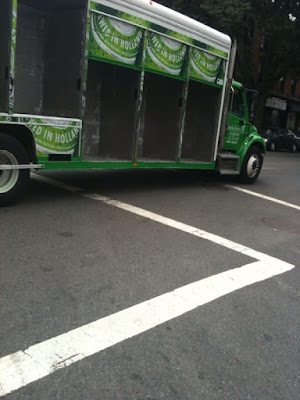 The relief that was felt last week upon hearing that elected officials and Phoenix Beverages had come up with an interim solution has turned back into frustration and disappointment. Starting yesterday, June 21st, Phoenix Beverages trucks (aka Long Feng beer trucks) were supposed to stop using Columbia St. and instead use the BQE when traveling between Pier 11, where they unload empty bottles to be recycled, and Pier 7, where they load up on beer to be delivered the next day.

As of today, June 22nd, they have not lived up to their promise. Numerous trucks were reported as traveling up and down Columbia St. all day today. I saw a few myself, got emailed about some, and talked to others who also saw some. Yesterday I also saw a Twitter posting that asked why the trucks were still being spotted.

I would like to urge local residents and businesses to make more noise about this. COWNA has been in frequent contact with elected officials about this, and elected officials have been keeping the pressure on Phoenix and EDC, but apparently its not enough.

I would also like to thank Council Member Lander's office, State Senator Squadron's office, and all of our other elected officials for the close attention they have been paying to this matter. I'm confident that we can come up with a solution and get these trucks off of our local streets as originally promised.

For some recent background information on this topic, check out these articles and posts:


Photo above taken today, June 22nd, at approximately 1:45pm. Submitted by anonymous source.
Posted by Chris B. at 10:45 PM

Sign the Petition To Confine Phoenix Beverages Operations to Pier 7 to Reduce Truck Traffic on our Residential Streets.

Why don't we organize a protest to stand in front of every truck on Columbia St. Stop traffic cold... It was bad enough and to add insult to injury is just a joke.