The PS 29 PTA
Cordially Invites You to

An Evening of Short Readings & Tall Cocktails
Plays, Poems, and More by the PS29 Parent Community 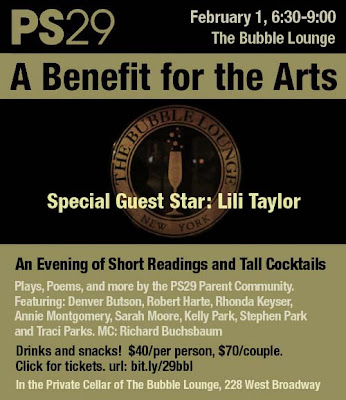 The Mayor of President Street 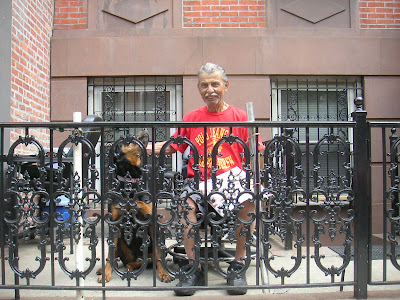 Anyone who walked President Street between Hicks and Columbia during the spring and summer couldn't miss Joe Licata, and if you walked that stretch regularly, Joe certainly didn't ignore you. A retired postal worker, Joe was a perennial fixture in the micro-neighborhood this side of the BQE, who loved people nearly as much as he loved the rottweilers (first Cleo, then Sheba) that lazed loyally by his side and behind the cast iron railing of his stoop.

I was shocked to find out yesterday that Joe had died. Shocked because Joe was one of the heartiest septuagenarians I had ever met. If he wasn't hanging out on that stoop under a giant umbrella reading a thick history of World War II, he was out on the golf course walking all 18 holes and perfecting his farmer's tan. A South Brooklyn George Hamilton. For Joe liked HEAT to an extent I've rarely seen in a native New Yorker. That long guttural groan heard between June and September over how miserable the city felt was a giant sigh of relief for Joe.

For the last decade I bid farewell to Joe most summer mornings and greeted him good evening on the return commute to my apartment two doors down from his brownstone. He has to be my most sustained neighborhood relationship here. I am sure I was not the only President Street resident whose habits he good naturedly ignored or chuckled at, witnessing those million and one trips to the bodega to buy the essentials: ice cream and beer. He wasn't a gossip--though he certainly knew when I broke up with a girlfriend or sublet to a new roommate--absorbing but not judging the ebb and flow of our block. The angriest I ever heard Joe was on the subject of the double parking that went on during street sweeping days. God forbid you boxed in his beat up red sedan with a Lexis.

I always knew Joe was an obsessive reader, but after he learned I bought Freebird three years ago, the floodgates opened. He had especially diverse tastes from military history to science, legal thrillers to the classics. He would offer his opinion on the state of literature today and bemoan the level of coverage in the New York Times Book Review. Then he would retreat to his basement alcove and bring out a bag of books for donation. In return he asked m 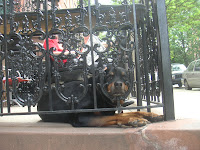 e to hunt down Arthurian novels or a new work on quantum physics that would add nicely to his collection. "Now get home and enjoy your dinner," he would end. "Boy, this July is the coldest I can recall."

Joe Licata provided the sort of constancy that can help mask the knowledge that we live in a city of incessant change. His death is a tough pill to swallow on President Street. But it is fitting that he got the most out of all those summers and didn't succumb while standing watch with his beloved Sheba. I couldn't agree with you more, Joe. This winter sucks. We will miss you enormously.

Services for Joe will take place on Monday and Tuesday of this week at Raccuglia Funeral Home on Court Street. Call (718) 855-7737 for the hours of the wake.
--Peter Miller
Posted by freebird at 6:08 PM No comments:

As many people have heard over the past few years, there is a new park planned for the space along the West side of Columbia Street between Kane and Degraw, which sits adjacent to the current stretch of the Greenway in our neighborhood. There is now a planned public meeting to discuss the community's vision for the space, which is extremely exciting! The details from an email sent out by the Brooklyn Greenway Initiative are below:
------
What: Columbia Street Open Space Visioning Meeting
When: Wednesday, February 2nd, 2011, 6:30-8:30 PM
Where: The Union Street Star Theater, 101 Union Street

Join Brooklyn Greenway Initiative, Regional Plan Association, and your neighbors as we begin the visioning for a new public open space on Columbia Street between Kane and Degraw Street

When the Van Brunt Street reconstruction and the Gowanus Flushing Tunnel construction are complete, the 80-ft deep area on the west side of Columbia Street is planned to become an open space element of the Brooklyn Waterfront Greenway. It is one of three open space nodes that we are either designing or commencing the community visioning process

On February 2nd, we will share the background research that has been compiled to date and invite you to share your ideas for the kinds of improvements and facilities that would be most beneficial to the Columbia Waterfront community

Please RSVP to info@brooklyngreenway.org with Columbia St Open Space I the subject line. We will send you a link to background information to help prepare you for the discussion on February 2nd.
Posted by Chris B. at 9:18 AM 1 comment:

There will be a rally tomorrow in support of shore power (aka cold ironing) at the Brooklyn Cruise Terminal tomorrow. Please come out and show that our community cares about pollution and local air quality!

Details about the rally and the issue can be found in the email from Councilmember Lander and Senator Squadron below. Additional details on the topic can be found at A View From the Hook 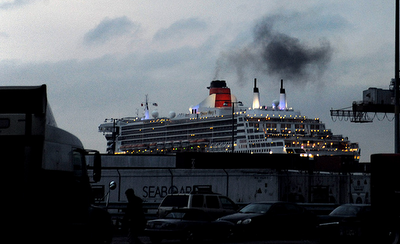 Photo from South Brooklyn Post via A View From the Hook

Please join us Monday at noon for a press conference and rally in support of bringing "shore power" to the Brooklyn Cruise Terminal.

Along with the community we have been pushing for shore power for a long time — now we are holding this "Stop Choking Brooklyn" rally because we can't wait any longer!

Switching to shore power — so that ships can hook up to the electric grid instead of idling their engines in port — would stop tons of unnecessary and life-threatening pollution, which is equal to thousands of cars idling.

The Port Authority and the Environmental Protection Agency have obtained $15 million in funding to build the necessary infrastructure. However, for shore power to become a reality, the Economic Development Corporation, which operates the cruise terminal, Carnival Cruise Lines which uses the terminal, and New York Power Authority, which delivers electricity to the terminal, need to come to a final agreement about the price of electricity.

Join us on Monday to rally for an agreement now, so the work needed to bring shore power to the Brooklyn Cruise Terminal can begin and idling cruise ships stop choking Brooklyn!

We're going to be holding the event on Monday. Here are the specifics:

There will be free surgical masks for everyone to wear in order to highlight just how much pollution is caused by the ships currently.

I hope you'll join us on Monday as we rally in support of a cause that will make our community an even better place to live.