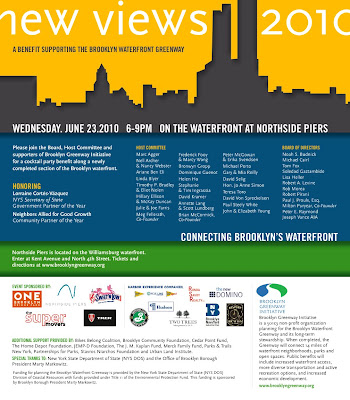 Brooklyn Waterfront Greenway Benefit on the Waterfront at Northside Piers!

Brooklyn Greenway Initiative (BGI) is thrilled to hold its New Views 2010 annual benefit for the Brooklyn Waterfront Greenway on the waterfront at Northside Piers in Williamsburg on Wednesday, June 23rd from 6:00 p.m. to 9:00 p.m.

“Each year, we hold our benefit at a waterfront location along the route of the Greenway that affords new views or new perspectives of the waterfront that have been largely or completely inaccessible to the public,” said Brian McCormick, Development Director and one of the three co-founders of BGI. “It is therefore fitting that the recently completed and soon to open public esplanade at Northside Piers will be the setting for this year’s benefit.”

Brooklyn Greenway Initiative is a 501 (c) 3 non-profit coordinating the planning, implementation and long term stewardship of the Brooklyn Waterfront Greenway, a 14-mile waterfront bicycle and pedestrian route stretching from Greenpoint to Bay Ridge. This year, using funding secured by Congresswoman Nydia Velázquez, BGI is working with the New York City Department of Transportation on a Master Plan for the entire 14-mile route of the Greenway.

According to Milton Puryear, Director of Project Development and co-founder of BGI, the Northside Piers public waterfront, coupled with the Kent Avenue segment of the Greenway, represents a major new piece of the Greenway puzzle now emerging. In total, 4 miles of protected bicycle lanes are available for use by the public and more is on the way.

In addition to hosting BGI’s benefit, Northside Piers will sponsor a membership in Brooklyn Greenway Initiative for all new residents of Two Northside Piers, which is now open for sale and nearing completion.

“We are pleased to offer the future residents of Northside Piers membership in Brooklyn Greenway Initiative so that they can learn about and support the exciting new waterfront connections”, said David Von Spreckelsen, Senior Vice President of Toll Brothers City Living, Northside Piers’ developer.

NAG, a Williamsburg non-profit, will receive BGI’s Community Partner of the Year award. NAG is a pioneering volunteer based community planning and environmental justice organization that has been performing grassroots organizing, advocacy and outreach/education to the North Brooklyn waterfront community of Williamsburg/Greenpoint since 1994.

“It is these partnerships that have propelled the Greenway forward and we are glad to take this opportunity to say ‘Thanks!’” said BGI Director of Programs and co-founder Meg Fellerath.

Guests of New Views 2010 will get a preview of this spectacular waterfront setting while they enjoy a summer buffet and the “hot and sweet” jazz music of Michael Arenella. BGI will be also be raffling off three bicycles, compliments of Trek Bikes and Bespoke Bicycles, tickets for a party of 10 at New York Water Taxi Beach at South Street Seaport, tickets for 4 on the Zephyr and Shark and a personal fitness training session compliments of Annette Lang Education. Con Edison will be providing a continuous shuttle bus loop from the L and G subway stations in Williamsburg to Northside Piers. 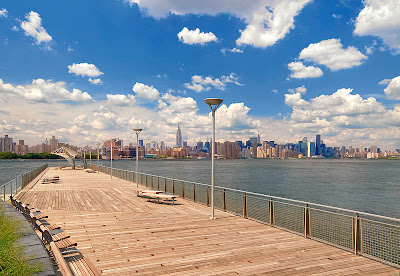 Hey Word on Columbia,
Great job with the blog. Can I ask a question that maybe u can address in a future post?

What is the deal with ugly fence/gate that runs along the docks on Columbia between Degraw & Kane? The fence is practically falling over and there is garbage all over the place? Who do we complain to about this?

Also on the topic of garbage. Is it me, or has our neighborhood been getting really dirty? On Columbia between Union and Degraw there seems to be papers and garbage accumately weekly on the streets and sidewalks...especially next to the Human Compass Garden. Who do we call for this?