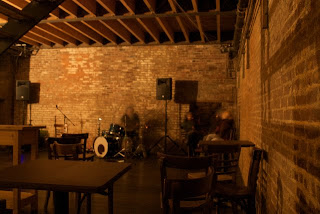 On 1/10/09, I'll be DJing alongside Prof. Rockwell at the recently opened basement space (pictured above) of Brooklyn Botanica, which is located at 220 Conover St. (@ Coffey) in Red Hook.

If you haven't been to Botanica before, its a very beautiful venue with a wide selection of cocktails that are handmade with fresh fruit or fresh squeezed juices. There are also some pretty unique beer selections available.

The entry is free all night and we'll be playing a mix of funk, soul, disco, hip hop, house, and whatever else we're in the mood for. 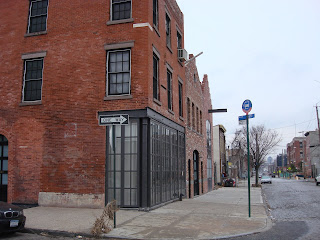 EDIT: I had posted a Shecky's review here before, but found a better and more in depth article at NewYorkology. On 9/8/08, NewYorkology wrote:

Red Hook’s new high-end cocktail emporium Botanica will start serving food as soon as this weekend, pairing small meat and cheese plates with its all-top-shelf liquors and organic infusions - including some grown on the roof.

Some other things you may need to know about the place: many of the drinks’ herbs are grown in the roof garden, the shower in the restroom is only temporary, the “Real World” cast is prohibited from filming there, they’re building a dance floor downstairs, and oh, and the chandelier was made-to-order in Murano.

Botanica is indeed infused with Red Hook - what it was and what it is becoming. The 1846 building at the corner of Conover and Coffey, map, was first used as an armaments factory, then a grocer and finally a longshoremen’s bar before it was abandoned in the 1970s and its floors collapsed into itself, according to Daniel Preston, the engineer who bought the building 11 years ago.

He fixed the building and opened up his parachute factory there. But when it outgrew the space, he expanded next door from scratch (but with old bricks so it’s hard to tell only the corner building is old.)

More of the article here

Is it true this place closed?!?!

I heard that it temporarily closed but that it now has re-opened.