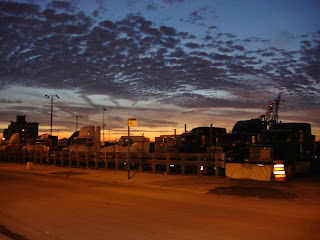 Living in a neighborhood that contains one of the last working ports in NYC raises a lot of issues, including truck traffic, pollution, and public access to the waterfront. However, people often overlook the positives of ports when talking about this, such as the fact that the ports employ many more people than any other business in the neighborhood and bring in so many of the goods that we consume. This is good for us and the rest of the city!

That being said, one of the best things we can do for both the community and port workers (pretty much a best of both worlds) is to urge our elected officials to pass regulation in the port industry that requires that port workers be treated as full time employees, rather than independent contractors, so that they can receive better pay and have higher incentives to drive cleaner, more environmentally friendly trucks.

While some comments at the end of the recent CB6 meeting regarding the fate of Atlantic Basin made one think that community residents and the port are at odds with each other, policy suggestions like this make me truly believe that things can be done in a way that works for all stakeholders involved
Posted by Chris B. at 8:45 PM

"However, people often overlook the positives of ports when talking about this, such as the fact that the ports employ many more people than any other business in the neighborhood..."

These are not jobs -- it's a welfare program.