“When I first heard La Excelencia’s 2006 debut album, Salsa Con Conciencia, I remember feeling as if I had been struck on the head with a pair of clave and thinking: ‘Yes! This is what salsa is all about.’” So says Tijana Illich, Latin music journalist, about her first run in with the 12-piece powerhouse being called “the most sought after group in New York” (Chris Soto, The Mambo Scene Magazine). 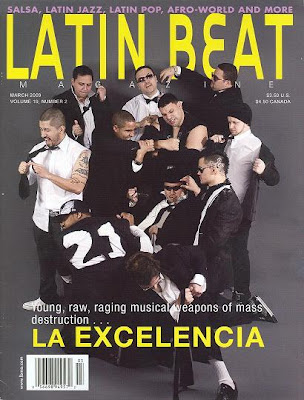 The band, started in 2005 by Julian Silva and Jose Vazquez-Cofresi, comes to Southpaw (125 Fifth Ave., Brooklyn) May 4th for a benefit party & concert (6:30pm). Their work their will support arts education programs for over 700 students run by Dance Theatre Etcetera, a community-based organization with a 17-year history of programming in Red Hook, Brooklyn.

These young musicians bring an urban edge to their socially conscious lyrics, and a no-frills, old-school sound that has some calling them the face of the salsa dura (“hard salsa”) movement. When their first album dropped the New York Times took note, saying "The real deal doesn’t show up that often, and here it is. Celebrate it".

So what made the group donate a free set when they’re in demand throughout the world? Like the music, it’s about giving something back. Not only will the band help a new generation of New Yorkers get access to the arts with their benefit concert, the men behind the band have reached out, through Dance Theatre Etcetera, to schedule a special workshop/performance with students at Red Hook’s South Brooklyn Community High School.

Visit Dance Theatre Etcetera to find out more about the organization

For more info about the benefit concert,