Save the date: Sunday Jazz in June at the Meadow!! 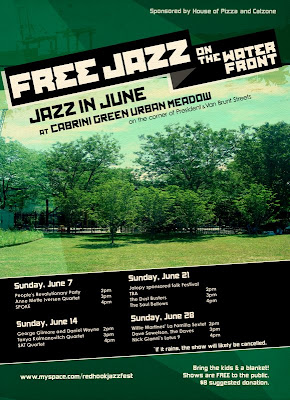 Playing with James Keepnews’ People’s Party @ 2pm
Daniel Carter - reeds, trumpet, flute
In addition to being one of the most inspired musicians of the New York Free Jazz scene of the last thirty-two years, Daniel Carter also has the distinction of a much broader approach to music than many of his "energy music peers." "I was an aspiring anarchist. Not in the sense of disorder, everything is crazy in the street, violence, but in the sense of wanting to be myself as much as possible, and...sometimes you discover you're radically different in your procedure. You have no real desire to be radically different in your procedure, and to clash with the procedures of others or the methodologies of others, but I got to the point where I didn't want to be told what to do." Thankfully, Carter has pursued his musical vision with high integrity, resulting in some of the most beautiful music to come out of NYC in a long time. People's Revolutionary Party is the creation of James Keepnews who calls the band--post everything ascension funk. PRP is:
http://www.myspace.com/peepsrevparty
http://www.youtube.com/watch?v=K1kR6U_jPXo

Anne Mette Iversen Quartet @ 3pm
Anne Mette Iversen is a member of the Brooklyn Jazz Underground and writes music that falls within various genres. She composes for strings, for choir and for brass instruments.She composed "Hvor er din bolig vidunderlig" for the 125 year anniversary of The Danish Church in New York. Also, she arranged the music when Denmark hosted 120 United Nations ambassadors, the General Secretary Kofi Annan and Crown Prince of Denmark, His Royal Highness Prince Frederik, to a dinner at the B.B. King Club in New York 2002.She composed "Rondo Alla Manipula" for 3 cello's which was exhibited at Charlotte Friis' exhibition "Storytelling Furniture" at The Danish Design Council in May & June 2005.

SPOKE @ 4pm
This Brooklyn group of unique musicians have created a truly post-modern yet beautifully melodic album incorporating diverse influences from 1960's free-bop, contemporary classical, funk and Chinese pop music.
Spoke's first album represents the culmination of a repertoire developed over years of playing together regularly. After forming in 2006 to play a regular Fort Greene restaurant gig, the ensemble quickly found a purpose in pursuing what one listener calls the "Art of the Compromise:" living in the intermediate territory between individual and collective improvisation, while retaining a sense of structure and tradition.

Sunday, June 21st
2-5pm Jalopy sponsored bluegrass festival
Featuring: The Dust Busters - "these guys will blow your head off. They are one
of the best groups I've ever seen" - Lynette, from Jalopy.
The Saul Bellows - klezmer style bluegrass.

Sponsored by The Famous House of Pizza and Calzone

Bring the kids, a blanket and a picnic, the event is free, with a $8 suggested donation for the musicians.

It's going to be awesome!!!