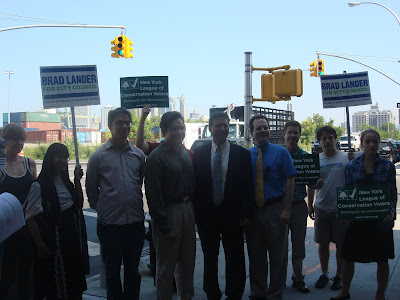 Brad Lander, who is running for City Council in the 39th District (our district in the Columbia Waterfront neighborhood), held an event today to discuss proposed steps for reducing truck traffic and achieving an overall greener port. The event served as a call for action to all stakeholders involved (see the link for the related petition below).

“We have both a deep need, and a great opportunity, to reduce truck pollution and work for a greener port,” said Lander. “Using Piers 7 - 11 to bring in goods by ship is smart economic and environmental policy – it is less polluting than long-haul trucks, and creates good jobs in Brooklyn. But more business in the port leads to an increase in local truck traffic and emissions. It is therefore critical that all parties – EDC, the Port Authority, ASI, Phoenix and port users – take significant short-term and long-term steps to reduce emissions, make sure that pedestrians, cyclists, and residents are safe, and make the port into a model of sustainability.”

In addition to Brad's speech, other local residents spoke about the neighborhood and the environmental issues it faces related to trucks and the port. The League of Conservation Voters also took the opportunity to endorse Brad at the event.

Here are some highlights of his speech and his plans for a Greener Port:

In the short term:
• EDC and Phoenix should agree to a faster, specific timetable for converting trucks and buses to compressed natural gas (CNG). Currently, EDC is allowing Phoenix seven years; but no timetable or interim commitments have been made public.

• Trucks moving goods between Piers 7, 10, and 11 should move internally within the port area. Phoenix and EDC indicated this would be true at community meetings, but the lease promises only that "trucks moving overweight containers" will remain internal.

• EDC and Phoenix should establish a “first source” program for new jobs: Phoenix' new business offers a great opportunity to create good, green jobs for local residents. While Phoenix has indicated a willingness to partner with a local non-profit organization (Southwest Brooklyn Industrial Development Corporation), they should agree to create a formal, official first-source hiring and targeted workforce development program, with clear targets and monitoring.

• The Port Authority and EDC should establish a timetable for connecting cruise ships to “shore power.” Currently, cruise ships in port run on generators, which are highly polluting. PANYNJ recently received announced substantial new federal grants to convert to shore power (through a process known as “cold ironing”, as part of their Comprehensive Clean Air Strategy for the port. They should establish a date and timetable for making this a reality.

In the long term:
All parties should work together to create a long-term, ambitious, comprehensive plan to make Piers 7 – 12 part of the most sustainable port on the eastern seaboard. Such a plan could help increase both the competitiveness and sustainability of the port, and help make it a better place to live and work. The long-term plan should look to achieve the following goals:

• Full-scale conversion of all trucks and buses serving the port to CNG (or other alternative fuel/low-emissions) vehicles.

• Shore power connections for all large ships in the port.

• A new truck traffic/safety plan that explores use of Bowne Street/Hamilton Avenue ramps.

• An updated plan and timetable for the Brooklyn Waterfront Greenway, which considers running the greenway directly along Atlantic Basin (which is made possible by the Phoenix deal, since no loading/unloading will take place there).

• A comprehensive “First Source/Green Jobs” program that connects Brooklyn residents to jobs in the port and related environmentally-friendly manufacturing and freight movement.

Next Steps:
As a follow up to the event, Brad is urging local residents and other interested parties to sign a petition on the topic here.

Also, below is a document that the Lander campaign distributed for some background information:
"Background on Columbia Waterfront Neighborhood and Related Port Issues"
Posted by Chris B. at 10:16 PM

Lander makes a ton of sense. Going green needs to benefit everyone, not just those that can afford it. A green port puts people to work and makes neighborhoods more livable. I like this guy!